Content migration into a Drupal website using spreadsheet or CSV data can be surprisingly effective — especially (counterintuitively?) with large and complex datasets. I’ve written about data migration in Drupal 8 a couple of times, but new projects keep highlighting the diversity of data sources and content configurations, reminding me over and over again that data migration doesn’t really have a one-size-fits-all solution. In this post we’ll get you from zero (fresh Drupal 8 install) to a basic CSV data migration — including entity references and multiple field values — in about 15 or 20 minutes. You can download the accompanying Aten CSV Migrate example module here, and skip straight to the instructions if you'd like.

Drupal 8 offers a handful of powerful and extensible migration modules in core. These modules lay the foundation for a wide variety of migration methods including several flavors of CSV importers like the point-and-click Entity Importer module for Drupal 8 developed by my colleague Travis Tomka. GUI powered migrations are perfect for minimally to moderately complex content, but can have a hard time crossing the finish line alone for complicated datasets.

Earlier this year I began working with the National Science Foundation’s National Ecological Observatory Network (NEON) to migrate robust ecological data collected from more than eighty terrestrial and aquatic field sites across the United States into a Drupal 8 website. The bulk of the data was destined for a content type with more than 75 unique fields, and the sheer volume and complexity of the data was steering me away from point-and-click interfaces.

Luckily for me, the NEON team are old hands when it comes to spreadsheet manipulation. Their expertise and flexibility were applied to formatting a spreadsheet export of their data specifically configured for an import into Drupal. Then their spreadsheets were exported to CSV, a format simple to consume into a Drupal website with the right modules and configurations. With just a little back and forth, we were well on our way to a successful, complex data migration with minimal custom code.

The basics: Getting spreadsheet or CSV data in Drupal

A quick introduction to configuring a CSV import using the Migrate Source CSV module for Drupal 8 is warranted. Once the basics are clear, a more complex import won’t be so overwhelming. If your data is in spreadsheet format, you’ll want to export it to CSV. The example below assumes a comma delimiter, no encapsulation characters, and no escape characters. For more complex content you’ll define these attributes in the source portion of your migration yaml file. The following steps culminate in a working example CSV data migration module you can download and tinker with. Note that this first example doesn’t discuss the more complex sample below, which is also included in the download.

Note: For related topics to this tutorial that you may need to understand, you may be interested in tutorials about using dependency injection, which is needed to get the logger service into your code. Understand the Service Container and Get a Service from the Container are good places to start with that. Additionally the Entity API Hooks tutorial uses logging as an example when working with entities.

Developers familiar with Drupal 7 will also be familiar with watchdog(), an API function that allows you to create a log message that appears on the Reports page in the Drupal administrative UI. Implementing D7’s hook_watchdog allows module developers to customize the destination of these log messages. In Drupal 8, both functions are replaced by a PSR-3-compatible logging interface (change notice).

In this tutorial, you’ll learn how to create the D8 equivalent of D7’s watchdog() function: creating a log message that appears on the Reports administrative page. In a future tutorial, we’ll cover how to create your own logger, and use it in your custom module. However, I've left you some hints and pointers at the end of this tutorial if you care to dive in before then.

There is a straight-up D8 procedural equivalent of D7’s watchdog function, as we learn from the change notice:

I downloaded the Examples for Developers module (version 8.x-1.x, but please consult the project page for the latest version) and looked for an example of this in action. I found a good one in the content_entity_example module within the Examples project.

After downloading Examples, open the project in your code editor or IDE of choice. (With Drupal 8’s object-oriented framework, I highly recommend using an IDE such as PhpStorm, simply because it makes navigating classes, methods, and their implementations so much easier. If you’re new to using an IDE, we have a nice set of PhpStorm IDE how-to videos from the creators, JetBrains, available on Drupalize.Me.)

Let’s take a look at the ContactDeleteForm class in examples/content_entity_example.

In your code editor, navigate to:
examples/content_entity_example/src/Form/ContactDeleteForm.php

If you have Examples downloaded to a Drupal 8 installation, that path is:
DRUPALROOT/modules/examples/content_entity_example/src/Form/ContactDeleteForm.php 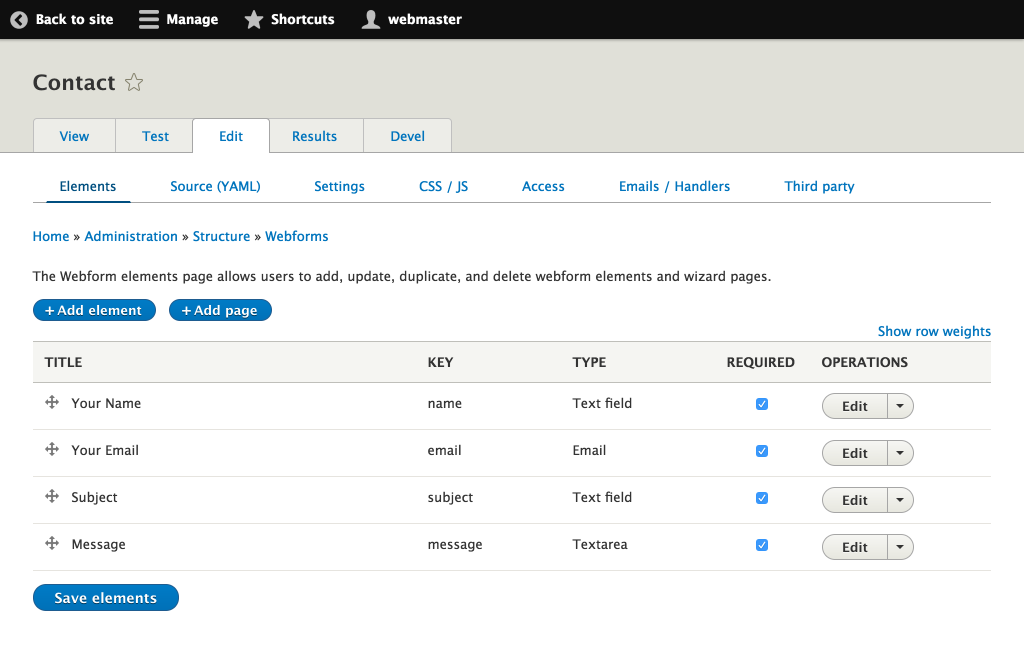 In the submitform() method, we see the following:

Let’s break this down.

In this example, the submitForm method relies on the Drupal service container wrapper, a class which smoothes the transition from procedural to object-oriented code in the Drupal code base. The double colon means that we’re accessing a class from “elsewhere,” or outside of the class that it’s called from. It’s kind of like using an absolute path instead of relative one.

A helper method that quickly creates a copy of the logger service.

So, from this, it looks like the logger method is way to kick-start the logger factory and get a copy of the logger to use in our code.

The name of the module, in this case “content_entity_example.”

The name of the method in the Drupal::logger service (in this case “alert”), which will correspond to a severity level, i.e. debug, info, notice, warning, error, critical, alert, emergency. These can be also found in the PSRLogLoggerInterface in the file DRUPALROOT/vendor/psr/log/Psr/Log/LoggerInterface.php

This can be a simple quoted PHP string, or a string that utilizes placeholders. In the latter case, pass in an associative array of specially formatted placeholder keys and values into the second parameter.

An array of placeholder keys and values. The key is the placeholder name with the appropriate prefix (see below for explanation), and the value is what should be used as a value. In this case, a method is called that supplies the value. Placeholders are provided so that values from context may be provided in the message. The logger will transform any placeholder messages to a safe format for output to HTML. For more information, see:

@variable — Use this style of placeholder for most use-cases. Special characters in the text will be converted to HTML entities.

%variable — Use this style of placeholder to pass text through drupal_placeholder() which will result in HTML escaped text, then wrapped with <em> tags.

Our Serum Bundle includes all of our previously released Serum presets. We hand-crafted each sound from scratch giving you a huge collection of inspiring production-ready presets.This Serum Bundle pack is nothing but inspiration. Omnisphere wavetables for serum. The trap-inspired Serum Presets in this collection can be used in any genre from Hip-hop and RnB to Lo-Fi and Deep House, providing you with the ultimate tools for your next track. This bundle includes over 500 presets with custom-made skins and bonus melody loops to be used alongside the presets in your own productions.

:variable — Use this style of placeholder when substituting the value of an href attribute. Values will be HTML escaped, and filtered for dangerous protocols.

Why would you want to use logging in your modules? You know how debug messages are really valuable during development? Well, when a site is in production and debug messages are no longer an option on a public site, log messages are a way to keep tabs on important things that are happening on your site—from notices about users signing in, to major errors that signal a problem that needs immediate attention. They can help you troubleshoot problems and find errors—both large and small—that need attention.

What should I be logging?

You can and should log anything that will help you keep tabs on what your users are doing, how the system is performing, and behind-the-scenes, automatic notifications, which can help you troubleshoot various errors. Things like:

As a developer, visit your Reports page often to learn about notices and recoverable errors that can let you know about places in your code that need attention. They may not be bringing down the system, but they are having some kind of impact and may point to one or more bugs.

Exercise: Implement your own logger

Several examples and variations of this can be found in core; for example, in contact, aggregator, and syslog core modules.

In a future tutorial, we’ll walk you through how to implement your own custom logger. For now, start using Drupal 8's logger to create log messages in your fresh new Drupal 8 modules and keep an eye on that Reports page!