The Definitive Book on the other Titanic Movies

Cameron’s “Titanic” is in a class by itself, many fine books have been published about it.

Simon Mills’“The Titanic in Pictures” is Everything Else Titanic

Brilliantly colored, large, life-like, easy to peel off, mounted on convenient sized heavy-duty 8 1/2 x 11 sheets for handling. Strong peel and stick stickers don’t have to be permanent, they can be peeled off and removed if you wish to change them.

Your special event will be admired and truly unique with these White Star Luggage Stickers.

The first and original story of the last Olympic Class liner, Britannic.

Simon Mills’ authoritative book tells how Britannic was a masterpiece of marine technology but was never designed for the stage that sealed her fate.

Eclipsed at birth in life and at her passing by circumstances beyond her control, Britannic was very much a hostage to the events of her time. She would never escape from the shadow of her more notorious sister, Titanic, and the destiny of Great Britain’s largest ship of her era would be played out on an altogether different arena. Nevertheless her story has a powerful drama of its own and it is only now that previous forgotten personal papers and diaries shed a new light on the human story of the last Olympian.

Only 50 sets available
Available only in the THS Museum Store
Certificates are numbered. Sold in a set of two only.
List No. TOT818. $119.95

Sing Along Custom InstrumentalMP3 Songs and Music From The Titanic Era 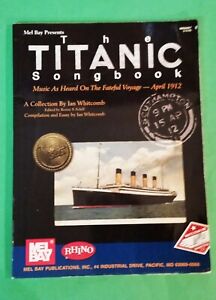 The musicians on boardTitanic had to memorize and play by heart a large body of
musical numbers listedin the White Star Line Music Repertoire book.
This section of MelodyLane is dedicated to their memory:
none of them survivedthe sinking.

Melody Lane is a private memberwebsite.
If you are a subscriber, pleaseclick on the text links below to go to the song pages.

Eyewitnesses claimed the musicians playedthis hymn, but which
version was played is in question.
Which would Mr. Wallace Hartley, bandleader, have called for?
His family believed version two, and wereso convinced, they
had it engraved on his tombstone.
3 MP3 Files for 3 Different Versions

MonCoeur S'Ouvre A Ta Voix
(My Heart At Thy Sweet Voice)

From The Opera Samson and Delilah
By Camille Saint-Saens (1877)
Song #27 in the White Star Repertoire
This haunting song of a tragic, doomedlove
somehow seems a fitting number for theTitanic..
though I am sure they didn't think ofit as an omen at the time.
Melody Lane MP3

Words by A.J. Lamb. Music by H.W. Petrie.
Publication:New York: F.A. Mills, 721 Seventh Ave., 1897
One of those songs you know you've heardbefore, but can't remember where;
it is a wonderfully dramatic solo forthe baritone voice. This song foreshadows
the great shipwrecks of the early 20thcentury, including the Titanic
Melody Lane MP3

Words and Music by Banks Winter (1912)
Lilting song of the sea, based on a popularnovel by the same name from the 1800's.
Melody Lane MP3

Words by Mark Bram and Music by HaroldJones
Publication: The Joe Morris Music Co.New York, 1912
A haunting song written after the sinkingpaying homage to the ship's heroes
Melody Lane MP3 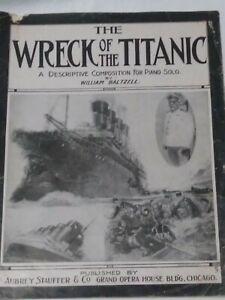 Number 59 in the WSL Repertoire:Verdi'sIl Trovatore

Number 60 in the WSL Repertoire:Selections from Verdi's Rigoletto

Number 65 in the WSL Repertoire:Selections from Gilbert and Sullivan's Operetta
The Pirates of Penzance

IAm The Very Model Of A Modern Major General

Many third class passengersbrought their own instruments
and played the currentpopular songs to pass the time away in steerage;
this page showcases thesetypes of songs.

Words and Music by C.S. Murphy
Publication: Francis, Day and Hunter,Ltd. (1902)
Or otherwise titled: 'How To Make TheBest Of Homelessness'
Melody Lane MP3

Written by Charles Ridgewell and GeorgeStevens
Publication: Francis, Day and Hunter,Ltd., London, England (1910)
This is a very funny song about a proverbialwimp..if you know a fellow
like this, you have my sympathies :)
Made Famous by Jack Pleasants
Melody Lane MP3 and Vintage Performancein MP3

Intermezzo - Two Step (1905)
Music by Neil Moret
Poem by James O'Dea
Publication: Jerome H. Remick &Co., Detroit - NY
At the turn of the 19th to 20th century,a plethora
of Indian themes hit the sheet music industry.I wasn't really sure
what the appeal was to them..until Iheard songs as cute as this one.
My two youngest children love to danceto this song, so this is for them.
Melody Lane MP3

By Harry Casling and Charles Collins
Publication: B. Feldman & Co., Ltd. (1912)
Great torch number from the English musichall days
This song has the most bittersweet lyricsI've ever read
Melody Lane MP3